What is gingivitis? How many times have you gone to see the dentist and was told that you have gingivitis and that you need to brush better?
Gingivitis is a technical term given when our gums are inflamed and puffy and bleed easily. They may bleed when we brush, floss or when we get a clean from the dentist.
Gingivitis is quite common. It is usually caused by an accumulation of plaque and bacteria around the base of the teeth. The bacteria cause the body to try and remove that bacteria and elicits a localised immune bodily response to the plaque and bacteria. This results in the swelling of the blood vessels within the gums, and therefore allows easier bleeding when the gums are touched by a tooth brush, floss or even a dental clean

Can gingivitis be treated? Of course, gingivitis can be treated and is usually treated by a good clean from a dental professional. This involves physically removing the plaque and bacteria from the base of the teeth, where sometimes it can’t be reached by tooth brush or floss. Most of the time this is quite effective, and the gingivitis resolves within a few days.
What happens if it is not treated? If gingivitis hangs around for a long time in patients there are several things that can happens, and most of them are painless and usually go unnoticed until it becomes quite severe. Over a long period of time gingivitis can cause bone loss around the teeth. This is called periodontal disease (periodontitis). Just think about the bone as a solid foundation the teeth sit in. If the foundation is lost the teeth can become unstable and loose over time. Something like a fence post that has only be stuck in the ground halfway and needs to hold up the fence. 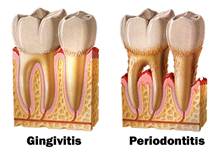 Gum recession can also be a consequence of long term gingivitis. Gum Recession is a term given to the appearance of gums moving down the tooth and exposing the root of the tooth. This can sometimes lead to cold sensitivity on teeth.

So, it’s quite important to recognise if you have gingivitis and the ways to treat it before it becomes a chronic issue.